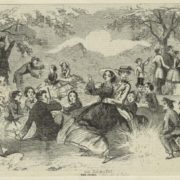 The morning of the 4th was ushered in amid the loud report of several guns, evidently to admonish our citizens that another anniversary of American independence had arrived, and the lowering clouds were portentous of squally weather.  But the coming of the bright sun dissipated the black clouds, and the blue vault of heaven became unspotted. The hope of our citizens became brighter with the sky.

At 10 o’clock a goodly number of our citizens formed in Procession, commanded by Col. Charles Harper, headed by the Shepherdstown Brass Band, and proceeded to the “Big Spring;” upon their arrival there they were dismissed for a few moments for the purpose of “procuring something to take,” after which the crowd was called to order by appointing A. R. Boteler, Esq., President.

After music by the band Mr. J.S. Pierce proceeded to read the Declaration of Independence, after which Mr. E. G. Lee was introduced who delivered an eloquent, appropriate and patriotic Oration, which was listened to with marked attention, indeed the audience seemed to be chained with the out-pouring eloquence of our young friend.

The hour of dinner having arrived, the audience was invited to a table, which groaned under the ponderous weight of refreshments, prepared for the occasion, which were done up in good style—“unostentatious and wholesome”—every individual seeming to perform his duty admirably in relieving the wide-spread table of its burden.  After the “inner man” was refreshed, an hour or two passed off in recreation, after which the assemblage was again called to order when toasts were read by Mr. J. S. Pierce.