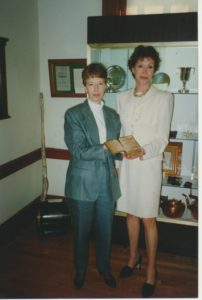 Mary Tyler Moore, the iconic television personality who died earlier this year, had a family connection to Shepherdstown as well as to the Historic Shepherdstown Museum.

Her great, great, great grandfather, Conrad Shindler, an early resident of Shepherdstown, was a coppersmith and lived in a house at the corner of German and Church Streets.  Several of the kettles he crafted are on display at the Museum.

The Shindler Family sold the house in 1869 to the Christ Reformed Church, which used the house as its parsonage.  In 1995 Moore purchased the house and donated it to the Shepherd University Foundation to be used by the university as a center for Civil War studies.

In September 1995, Mary Tyler Moore attended the dedication of the Center which was named after her father, George Tyler Moore, an avid historian.

Also in attendance at the event was Jo Ann Knode, a then member of the Historic Shepherdstown Commission Board of Directors. Mrs. Knode invited Mary Tyler Moore to visit the Museum just down the street and view not only the copper kettles fashioned by her ancestor, but also the Shindler Family Bible, on display on the second floor of the Museum.

The bible was donated to the Museum in 1991 by E.B. Rogers, another Shindler descendent. The bible is inscribed with the date “16th of March 1792.”

Ms. Knode recalls that Mary Tyler Moore leafed through the Bible, but since she didn’t have her glasses with her, she was unable to read most of the inscriptions. Ms. Knode’s daughter, who had accompanied them to the museum, snapped the accompanying photo.