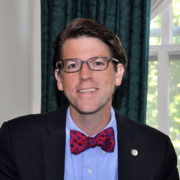 On August 30, Dr. James J. Broomall will speak on “Crossroads: Civil War Comes to Shepherdstown.” Dr. Broomall is an Assistant Professor of History at Shepherd University, and Director of the George Tyler Moore Center for the Study of the Civil War.  His talk, part of the Historic Shepherdstown Commission 2017 Speakers Series, will take place at the Robert C. Byrd Center for Congressional History and Education on North King Street on the campus of Shepherd University.  It is free and open to the public.

The event will begin at 6:45 with a short HSC Annual Meeting, followed by Dr. Broomall’s talk at 7:00 p.m. At the Annual Meeting, members will vote on new Board Members and a new Five-Year Plan.

Dr. Broomall earned his doctorate at the University of Florida.  His forthcoming book, “Personal Confederacies: Southern Men as Citizens and Soldiers,” is under contract with the University of North Carolina Press. In it he describes the emotional lives and gender identities of white southern men and their families, before, during and after the Civil War. This presentation will feature voices of civilians and soldiers to capture how the American Civil War threaded itself through the small community of Shepherdstown, Virginia, and the adjoining region.

For further information, please contact Teresa McLaughlin at info@historicshepherdstown.com or 304-876-0910.

The Civil War Comes to Shepherdstown — September 1862
Scroll to top