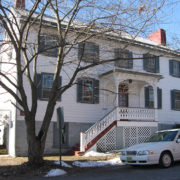 125 Years Ago: Murder of Young Susie Ferrell Shocked Shepherdstown and the Country

Shepherdstown doesn’t often make national news, but back in January of 1892, a crime committed here made headlines – well, at least bold-face type—in several newspapers across the country.  Harry Smootz, a local boy some 28 years old, became enamored of Susie Ferrell, described by newspapers as a “bright, pretty and popular young lady,” some five years younger than Smootz.

Susie had rejected him and his proposals of marriage, but Smootz became obsessed and stalked her.  There was snow on the ground on January 22, and Susie and a friend  were going to enjoy some sledding,  Smootz, with gun in hand, approached the pair as they walked on New Street. Susie, fearful of what might happen, told her fried to run for help.

Smootz grabbed Susie and fired the gun, killing her instantly. 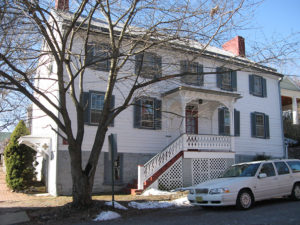 The Christian Clise House on New Street, where Susie Ferrell’s body was taken.

Several townsfolk, having heard the shots, ran to the scene. They carried Susie’s lifeless body into the nearest house.

Smootz, meanwhile, then ran a couple of blocks to the Entler Hotel, where he met up with his brother, Charles, and told him and several others that he had killed Susie Ferrell. The witnesses took his gun and called for the authorities.

Arrested by Constable John Maddex, he was taken to the home of Shepherdstown’s Mayor W.N. Lemen’s and the deputy sheriff, Col. William A. Morgan, was sent for.

News of the murder had spread through town and, within minutes, an angry crowd of several hundred persons had gathered outside the mayor’s home. Col. Morgan, addressed the crowd telling them not to interfere.

A paddy wagon pulled up to the house and Smootz was whisked away to the jail in Charles Town.

“This is one of the most law-abiding communities in the Valley,” wrote the Roanoke Times, “but it was hard for the crowd to see him carrried to the county jail.”

For several days after the murder, there was fear of a lynch mob attacking the jail, and Smootz was taken to safe keeping under guard to Summit Point for the night, and later to Charleston, for several days, until feelings calmed down.

Smootz was tried in June of 1892.  The prosecuting attorney called the murder “the most atrocious crime ever committed in the county.” After five days of testimony, it took the jury a little over an hour to reach a verdict of “murder in the first degree.”

The judge sentenced Smootz to be hung on October 7, 1892.

On the morning of September 21st, Smootz was discovered in his cell, dead from an overdose of morphine. How he obtained the drug was never discovered,

“There is a general feeling over the county that Smootz’s suicide puts a satisfactory close to the terrible tragedy,” reported the Baltimore Sun.

Not quite. That’s not really the end of the story.

Some residents of Shepherdstown claim that Susie’s spirit still haunts New Street where she was murdered.  In 2016, the television series, Ghosts of Shepherdstown, dramatized the murder—albeit taking some artistic license—and supposedly helped both Susie and Smootz cross over, if not to another plane, then perhaps to another episode.