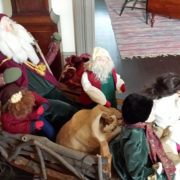 At Christmas time, in the front parlor of the Historic Shepherdstown Museum you’ll find a sleigh near the fireplace. The sleigh, with its animated figures, was donated to the museum by Keith Knost about 1998. It depicts a modern-day Santa Claus, but with a nod to a traditional German and Shenandoah Valley character known as Belsnickle, roughly translated as St. Nicholas in fur.

Belsnickle, usually ragged and disheveled, wears a hat, a long, heavy coat of fur and sometimes a mask with a long tongue. In addition to his bag of goodies, he carries a switch to “punish” naughty children. According to the tradition, during Advent, and especially closer to Christmas, he would make his way from home to home, rapping on the door or window with his stick. Once inside, the children of the family would have to answer a question for him or sing some type of song. In exchange he would toss candies onto the floor. If the children jumped too quickly for the treats, they might end up getting struck with Belsnickel’s switch.

In later years during Christmas time in the Shenandoah Valley, groups known as Belsnicklers would dress in costume and go door to door, carrying lanterns, singing and carrying on. Neighbors would offer them cakes, cookies and maybe wine and cider. Belsnicklers were popular in Shepherdstown in the 1880’s and 1890’s, according to the late James Price, Shepherdstown’s historian emeritus.

The January 5th, 1922, Shepherdstown Register recounts an evening of Belsnickling:

The masqueraders were a lively feature of holiday week. The young men exercised great ingenuity in devising striking costumes… and they had a lot of fun.  Masked and arrayed in fancy costumes these jolly fellows would make their rounds. It was accustomed to serve suitable refreshments to the masqueraders at the homes where they visited, and so cake and wine and cider and candy and nuts would be set out. They usually wound up the evening at Uncle Billy Lambright’s store where the girls would congregate and wait for the end of the night’s fun.

Belsnickling faded out sometime in the 1950s, but many older residents still remember the tradition fondly.