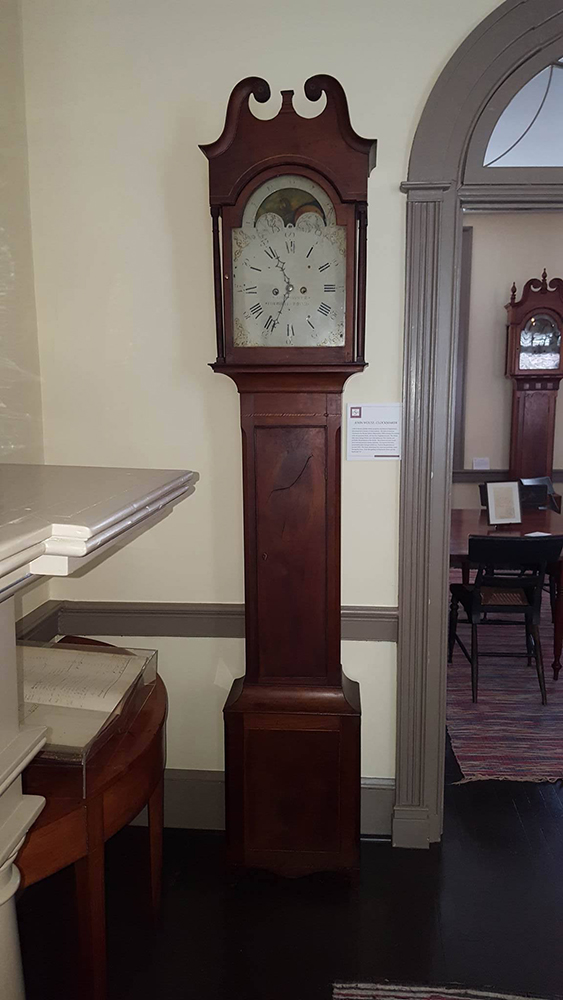 John Woltz and his Clock

John Bernard Woltz was born in 1785, the son of John George Adam Woltz and Charlotte Shugars.  His family became well established in the silversmith and watch- and clock-making business in Hagerstown, Maryland.  Both his father, George Woltz, and his brother-in-law, John Reynolds, were respected Hagerstown silversmiths and clockmakers, so it is likely that the younger Woltz learned his craft from them.  An advertisement in the Maryland Herald & Hagerstown Weekly Advertiser on November 21, 1810 announced that John Woltz had moved his watch and clock making business to Public Square in Hagerstown.  By 1811, Woltz had located to Shepherdstown as shown by the following announcement from the Farmer’s Repository, a Charles Town newspaper, on June 7, 1811:

INFORMS the public that he has commenced the above business in Shepherd’s – Town, next to Mr. James Brown’s store, and opposite to Mr. Robert Russel’s saddler’s shop, where he hopes from his long experience, and attention to business, to give full satisfaction to all those who may favor him with their custom.  All kinds of watches committed to his care will be faithfully and punctually repaired.  He intends to keep a general assortment of GOLD and SILVER WORK and a handsome assortment of JEWELRY of every description which will be disposed of on very low terms.

In an advertisement in the Martinsburg Gazette on May 19, 1814, Woltz announced that he had “…removed from his old stand to the house one door above Mrs. Wiltzhammer’s tavern, and opposite Mr. John Heizer’s where he intends carrying on the CLOCK AND WATCHMAKING business, in all its various branches, and intends keeping a constant supply of SILVER AND JEWELRY WORK on hand.”  This location would have been part of Lot #68 on the east side of North Princess that Woltz purchased from William and Catherine Kerney on January 17, 1814.  Woltz still owned this property in December 1832 when he gave it in trust to secure a $400.00 note payable to Jacob Bedinger.  Whether he was still operating a business at the Princess Street location in 1832 is unknown.

The assumption is that John Woltz made the works for this clock while the cherry case was probably made by an unidentified cabinetmaker working in Shepherdstown at the time. The clock has a weight driven time and strike movement with a moon phase dial and is signed on the face:

The cherry case is a simple design, sometimes referred to as the neat and plain style.  The hood has a broken arch top ending in carved sunburst rosettes, front and back columns, arched side window openings and string inlay.  On the waist, there is angled inlay just above the door, the corners are chamfered and the solid door has applied thumb molding.  On the base, the corners are chamfered, string inlay outlines a center panel, and angled inlay is applied just above the straight bracket feet and shaped apron.

On the hood, the rosettes and front cornice are glued and further secured to the case with countersunk screws driven from the back.  Cornices on the sides of the hood are flush nailed.  The scroll board is half-blind dovetailed to the upper side panels while the top board is open dovetailed to the lower side panels.  Nails driven from inside join the upper and lower side panels.  The lower side panels are attached with through tenons to the sides of a three-part based that is tongue and groove joined.  Molding is flush nailed to the base of the hood.  Front turned columns are surface glued while the rear columns are dadoed in place.  The four piece door frame is mortise and tenon joined and is attached to the hood with two flat hinges.  Windows in the side panels are arched on the outside while the insides are larger rectangular cutouts fitted with glass.  String inlay is applied just above the arched door opening and continues along the base of the upper side panels.

Cove molding and trim is glued and surface nailed to the top of the waist section.  Side panels extend from the upper part of the clock bottom into the hood area where they support the clock work’s seat board.  The side panels are butt joined to the chamfered door stiles and are secured with a series of vertical glue blocks.  The upper and lower horizontal boards of the door frame are likely mortise and tenon joined to the stiles.  The waist door is solid cherry with applied thumb molding and closes into the lapped opening of the door frame.  A line of diagonal inlay is applied just above the door opening an continues along the clock’s sides.

The side panels of the base are glued to spacer blocks that are in turn glued to the bottoms of the waist sides. Another spacer is connected to the front ends of the side blocks.  This joinery is concealed by cove molding glued and surface nailed to the waist and bottom.  The base’s front panel sets in rabbets in a frame formed by the chamfered stiles and upper and lower rails; this frame assembly, probably mortise and tenon joined, is butt joined to the side panels and secured with a series of small glue blocks.  The lower portion of the side panels form the rear feet, shaped apron and a portion of the front feet.  In the front, the apron is shaped from the lower rail and the feet are continuations of the stiles.  Diagonal inlay runs along the front and sides just above the feet and string inlay forms an outline of the base panel.

The back of the clock is one solid vertical board set in rabbets in the base and waist and held in place with nails.

The clock contains an eight-day weight driven movement that strikes on the hour.  The front and back brass plates are pinned to four shaped pillars and the movement is secured to the seat board with hooks over the bottom pillars. The pulleys and weights are held by brass cables on smooth winding drums.  The painted, arched dial is attached with pins to a false plate which in turn is attached with pins to the front plate of the works.  The bell is marked G. Ainsworth Warrn.  for George Ainsworth, a brass founder in the town of Warrington in England.  (It was not unusual at the time for American clockmakers to use some components, especially bells, false plates and dials, that were imported from England.)

Breaks to the left arch of the hood and the upper frame of the hood door have been repaired.  Cracked glass in the hood door has been stabilized.  Recently fabricated columns replace two that were lost over time.  The waist door has a large shrinkage crack.  Damaged/missing molding has been replaced.  Some lost inlay has been replaced and other inlay is misaligned due to wood shrinkage.