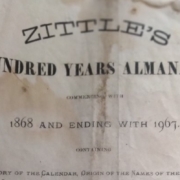 Have you ever worried about lice in your cabbage? Does your milk taste like turnips?  Does your canary have asthma? Or maybe you want to stop your cows, or perhaps your horses from kicking.  How about a proven recipe for grape pie, persimmon beer, or Indian corn vinegar? Do you want a sure cure for the croup, an ear ache, a sore throat, freckles, dropsy, bedbugs, or maybe you just want to cure meat.

Look no further than Zittle’s Hundred Years Almanack, 1868 and Ending with 1967, a copy of which was recently acquired by the Historic Shepherdstown Museum.  It offers an insight into the customs, foods, health, and daily life of 19th century rural America.

Printed on what appears to be newspaper stock, the now tattered 64-page booklet was published in 1868 in Shepherdstown by John H. Zittle, who also published the The Shepherdstown Register.

Besides weather predictions for the following 99 years [Did it really snow in Jefferson County on February 18, 1960 as predicted?], it contains “antidotes for poisons, useful hints, practical information and valuable recipes.” 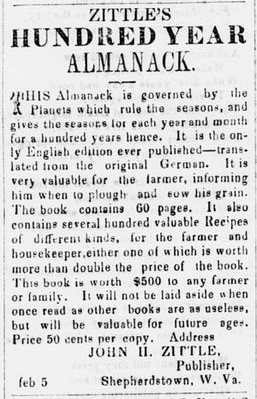 Selling for a mere 50 cents, the Almanack, according to Zittle’s advertisement in The Shepherdstown Register, was “worth $500 to any farmer or family” and the recipes alone were “worth double the price of the book,”

Zittle was born in Maryland in 1832 and moved to Shepherdstown in 1853 when he purchased The Shepherdstown Register newspaper.  He was a member of the local Shepherdstown militia—the Hamtramck Guards – which was one of the first units to arrive in Harper’s Ferry to respond to John Brown’s rebellion in 1859.  Zittle later wrote a book about the event, A Correct History of the John Brown Invasion at Harper’s Ferry, West Va., which was published by his wife in 1905.

After serving as a second lieutenant in Company B, the 2nd Virginia Infantry, known as the Stonewall Brigade, he was back in Shepherdstown by 1863, when he began his first of seven terms on the town council.  He also served three terms as mayor of Shepherdstown.

Except for a break during the Civil War years, Zittle edited and published the paper from 1853 until 1882, when sold the paper and printing press to William Snyder.  Zittle died in 1900 and is buried in Middletown, MD.

The Museum’s 1868 edition is listed as the “First American Edition,” and advertisements for the Almanack appear in The Shepherdstown Register only in 1870. There may not have been subsequent publications after that date.

There is a single advertisement in the Almanack, one for fellow townsman W.M. Entler’s “Sure Cure,” which according to the ad on the back cover, “never fails to cure cholera, cholera morbus, cramp, colic, flux, dysentery, summer complaints, diarrhea, etc., etc.” It cost 35 cents a bottle, with a guarantee: “No cure, No pay.”

[For more about John Zittle, see The Editor and the Spy: Espionage and Poetry in Shepherdstown on the Eve of the Civil War.