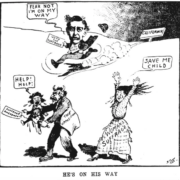 On March 10, 1920, West Virginia became the 34th State to ratify the 19th Amendment to the U.S. Constitution, which prohibited the states from denying women the right to vote. Also known as the Susan B. Anthony Amendment, it was named after this early pioneer of women’s suffrage.

Two years earlier, President Woodrow Wilson urged passage of the Amendment. It was eventually approved by both houses of Congress and by April 1920, by 33 states. Thirty-six states were needed before it became the law of the land.

In West Virginia, Governor John J. Cornwell called a special session of the state legislature to take up the amendment. After an initial tie in the State Senate (14 to 14) the Amendment finally passed on March 10, 1920, after the vote was delayed to allow State Senator Jesse Block time to return to Charleston from California.

West Virginia became the 34th State to ratify the Amendment.

State Senator, Milton Burr, of Bardane, Jefferson County, voted against the amendment, despite telegrams from President Wilson, the Attorney General, the Secretary of the Navy, Serena Dandridge and other residents urging him to vote for the measure. Jefferson County’s Delegate, Milton Osburn Rous, also voted “NO” on the amendment.

Washington State ratified the 19th Amendment later in March, followed by Tennessee in August, thereby giving women the right to vote in the 1920 election.