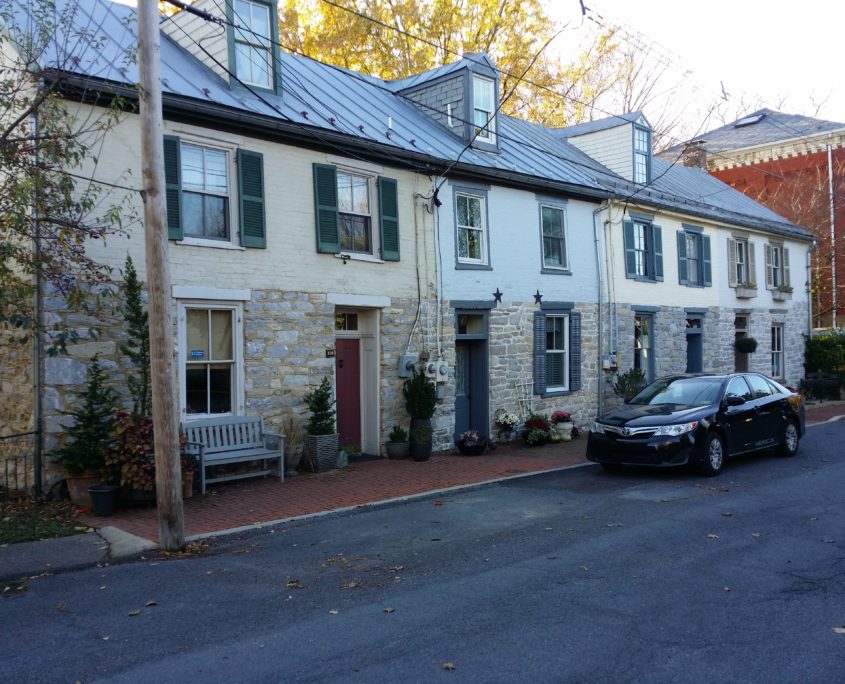 The four houses that make up Stone Row on New Street were once the site of one of the first breweries in what is now the State of West Virginia. Marc Briod, a board member of Historic Shepherdstown Commission and a resident of one of the units, writes about the history of the building.

Philip Shutt built his limestone brew house on New Street about 1792.  No doubt he chose the location in order to be next to Town Run, a spring-fed stream that flows along the southwest side of the property.  All good beer requires good water, and spring water is especially prized.  Shutt’s Cream Beer soon became popular with locals, and later with Irish laborers who helped build the Chesapeake and Ohio Canal during the early 1830s.

Philip-the-Brewer arrived in Shepherdstown (then called Mecklenburg) during the late 1780s, a newly married adventurer from Bucks County, Pennsylvania.   It is likely he came originally from a region near Zweibrucken, Germany.  He may have served with the British as a Hessian mercenary during the War of Independence.  If so, he apparently changed his name from Schutz to Shutt, perhaps to have a fresh start with an altered identity.

Armed with money in his pocket, youthful ambition, and a supportive bride at his side, Shutt must have decided that Mecklenburg would be a fine place to build a log home and stone brewery on New Street, open a tavern on German Street (now the Mecklenburg Inn) and raise a family.  In 1796 three of his properties were insured by the Richmond Fire Insurance Company.  Some stones used to build his brewery may have been quarried straight from New Street and hauled into place just a few yards away. The resulting gaps in the street were then filled in with gravel and dirt.

Slavery was common in Shepherdstown until the Civil War.  Census records show that Shutt usually kept one or two slaves as well as three or four large animals.  He is said to have offered his horse, “Young Nebuchadnezzar,” for stud service out on the street — until residents complained about spoiling the innocence of children.

Philip and his wife, Anna Maria, were active in the life of the town.  Both served as elders at St. Peter’s Lutheran Church, and Philip was the treasurer for nearly 30 years, until 1827.  He was elected twice to the town Court of Trustees, in 1797 and 1813.  During his first term the town’s name was changed from Mecklenburg to Shepherd’s Town in honor of its deceased founder, Thomas Shepherd.  Trustee town meetings were occasionally held at Shutt’s tavern.

Anna Maria gave birth to five children during the 1890s, three boys and two girls, all christened at the Lutheran Church.  Philip died in 1833, around age 73.  His oldest child, Elizabeth, moved with her husband to Sagamon County, Illinois.  His son, Jacob, moved there as well.  Both families then flourished in the town of Springfield, including Jacob’s two sons, George, a “bon vivant” lawyer who lived very near the home of Abraham Lincoln, and William, who later became mayor of Springfield.

Stone Row continued its colorful history long after passing from the hands of the Shutt family.  A famous incident occurred during the Civil War.  Redmond Burke was a notorious Confederate scout for General J.E.B. Stuart.  Sometimes he visited young Virginia McGlincy, who lived with her family in one of the four dwelling units.  Apparently she was a collaborator who was spying for Burke. They may also have had a romantic relationship.  But Burke carried a price on his head.  So when the Union garrison at Sharpsburg learned of his whereabouts they went straight to the McGlincy residence and demanded entrance.  It was a dark night, and Burke, a small man, was hidden above a little trapdoor in the ceiling of the second floor.  At first Virginia refused entrance to the soldiers, even whacking at them with an ax handle.  So they backed off and enlisted help from old Mr. Fawcett who lived next door.  He carried a lamp, which she promptly smashed.  Only after surrounding the place and fixing their bayonets were the soldiers allowed entry.  They found no trace of Burke.  But a few days later they returned to town on a new tip and descended upon his mother’s house on Duke Street, where they shot and killed him as he tried to escape.  Redmond Burke is buried in Elmwood Cemetery.

Another Stone Row story comes as well from the Civil War era.  John Wesley Culp was a young boarder in one of those same dwelling units.  He worked for the Hoffman Carriage Company nearby, and became good friends with John, another Stone Row resident.  Both men joined the Confederate army and fought at Antietam, but were captured by Union forces and imprisoned at Fort McHenry.  John then wrote a letter to his wife, Mary, saying that he and Wesley could be released on parole if they would pledge an oath to never again take up arms against the Union.  He said he felt conflicted about what to do and wanted her advice.   She wrote back that he should remain loyal to the Rebel cause and remain in prison.  “You were born in the South.  You have lived in the South throughout your whole life.  Swearing to that oath would be living a lie. Rot in prison, but don’t sign the oath. Your wife Mary.”   She sent a different letter to Wesley that hinted they might be romantically involved.   “You were born in the North.  You have family in the North.  Swear the oath, kiss the book and hurry on home.  Mary.”  Obviously she had no way of knowing whether Wesley and John would share the contents of those letters, so she had to be discreet.

The following year Culp left town again, this time to fight with Confederate forces at Gettysburg.  Ironically, Gettysburg was his boyhood home and the site of his ancestral farm.  As fate would have it, Wesley was killed on or near “Culp’s Hill” by a bullet to the forehead.   Legend says that Union officers allowed only one Confederate soldier to be buried there.  Many believe that soldier was John Wesley Culp, presumably in honor of his familial ties to the soil.  Legend also has it that Mary was at first seen walking the streets of Shepherdstown, heavy with child.  But after receiving the news of Culp’s death she was no longer pregnant.  Today the muffled cries of a newborn baby are said to be heard coming from subterranean stairs beneath Stone Row.

More recently part of Stone Row was restored by Walter Washington, a descendant of George Washington’s older brother, Samuel.  In 1987, Walter purchased one of the dwelling units and worked on its restoration until 1991. Today he remains active in the effort to preserve early homes and landmarks of Jefferson County.  He currently resides at “Harewood” (as of 2016), his ancestral home, which was built by Samuel Washington near Charlestown.

Throughout its history Stone Row has undergone many physical transformations.   The original stone structure was a long single story with two smaller stone buildings behind, each with a massive fireplace.  Later, the four separate townhomes shared half a fireplace.  The brick second story was added in the 1830s.  During the late 1800s several stone buildings in the back were tied into the main structure, resulting in two larger rooms with handsome interior stone walls.  By the early 1900s Stone Row had acquired four stoops with Victorian style porches in front of each entrance.  Before 1950 the stone exterior was covered over with paint or stucco, requiring no pointing and little maintenance.  For a while part of the building stood vacant and served as storage.  But renovation began in the 1970s.  The final section of stucco siding was removed in 2003, revealing the full scope of Shutt’s original stonework.  In 1998 thick concrete slabs covering Town Run were cut and dragged away. They had originally supported firetrucks parked beside the old fire hall (built in 1912). Today the lively dappled stream, once known as “Falling Springs,” is again clearly visible to passers-by.

Stone Row is Stop 38 on the walking tour of Shepherdstown.

Holiday Traditions: From Germany to German Street
Scroll to top